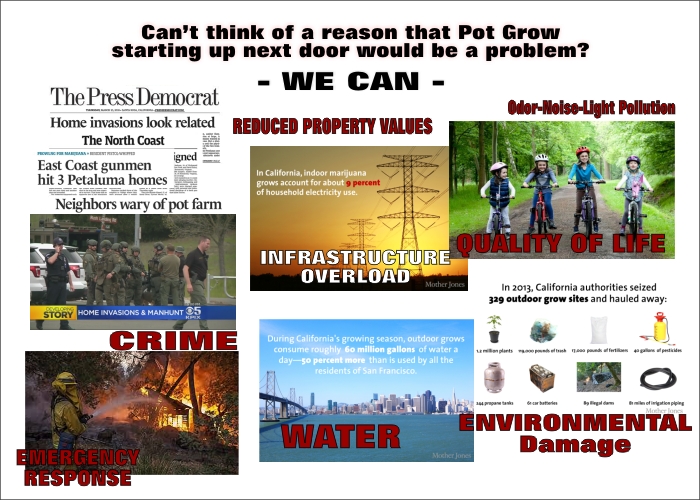 9 out of the last 11 murders in Sonoma County happened at pot farms.

Outdoor pot grows consume roughly 60 million gallons pf water a day – 50 percent more than is used by all the residents of San Francisco.

The energy needed to produce a single joint is enough to produce 18 pints of beer and creates emissions comparable to burning a 100 watt light bulb for 25 hours.

The production and distribution of pot in America emits as much carbon as 3 million cars.

An indoor grow module containing 4 plants sucks as much electricity as 29 refrigerators.

For every pound of pot grown indoors, 4,600 pounds of CO2 gas goes into the atmosphere.

In California, indoor marijuana grows account for 9 percent of household electrical energy use.

In 2013 California authorities seized 329 outdoor grow sites and hauled away:

But, no worries, these operators will all become Ralph Nader after legalization.

In fact only a very small percentage have applied for legalization. The remaining environmental catastrophe is still out there and will remain out there.